The last Pluto image before New Horizons went silent and got down to the business of taking close-up fly-by pictures showed the "heart", or as it is being re-imagined, the "dog Pluto":

(I've posted it upside down to mess with your pareidolia)

The LORRI camera specialises in high resolution, but is only monochrome. The Ralph camera is lower resolution, but can detect colours. An exaggerated-colour view of Pluto shows the heart is not a single feature, but two. The dog's muzzle is much bluer than the head.

It really looks to me like the light regions are flowing from the hidden winter hemisphere over the equator to the summer hemisphere. I suppose it can't be doing that every Pluto year, because although the light areas have fewer craters than the dark equator band, they haven't got none, and it would take more than a hundred years or so to collect that number of impacts.

Everyone keeps talking about the four dark spots on Pluto. Is it just me, or is it more like a single dark region overlain by lighter stripes? 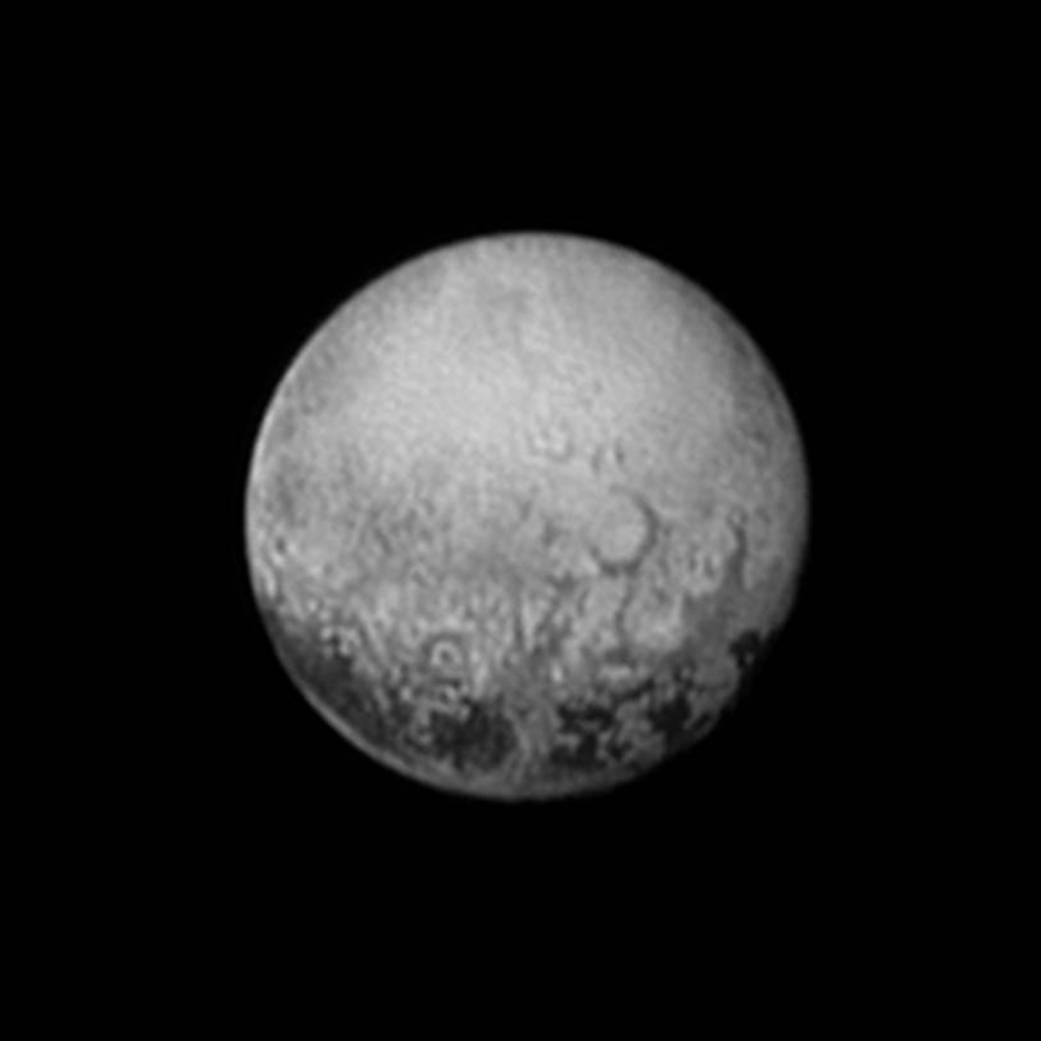 (edit: I turned it upside down just for variety, and because I just found out how to do that in HTML)

I hope I haven't started the next #thedress meme.

I dreamt I saw Mrs T last night
Alive as you or me
I said, you ghost, you're ten years gone
I never left, said she

The doctors told us at the Ritz
A stroke took you, in bed
Takes more to kill the Baroness
Said Maggie, I'm not dead

And rising up as black as sin
The Devil to the bone
She laughed, What you forgot is it
Was never me alone

We're everywhere, the Maggon said
Thatcherism's all around
Where cops and blacklegs break the line
The Snatcher can be found

In every swindle, scheme and scam
In every stock and share
Wherever con-men count their loot
The Iron Lady's there

In MS Access 2003, I have a table with entries of the form

I wanted to have each entry in the source table only once, for integrity, but display each entry twice in a long list, once in active form "A owes B", and once in passive form "B is owed by A". I think I can do it in SQL by glomming together two queries with identical structure to make one long list, by doing something like:

But I apparently can't do that graphically from the user interface, which I'd prefer so I can hand it to colleagues to maintain. Is there an alternative way of getting a nice long list showing both what everybody owes and is owed, without creating two records that could drift into inconsistency?

pwilkinson's suggestion with calculated fields would certainly work, but I eventually just went with the SQL. The menu option "Query.. SQL specific.. Union" is not that obscure, and nobody seems to be freaking out so far. Thanks for the suggestions.

When I got home and parked the car last night I heard meowing in the street, and on investigating I found a small scared young tabby cat at the far end of the street. Since it was about to rain heavily, I took the (almost) kitten in and put it in the bathroom with litter, food, water and a newspaper-lined carrier with some of the boys' old toys in. Then I went out and asked the newsagent to let me know if anyone came in looking for a lost pet.

I spent today ringing round the cat shelters, and being dismayed that they have such waiting lists. Castle Vets confirms it's a girl and she's not chipped. Tonight I posted big found signs around the neighbourhood.

I need to get this cat off my hands fast, preferably into the grateful hands of worried owners. Buzz will not tolerate her in the house, although Rocky is more mellow. She's very fond of humans and wants me to be her new daddy, but that's not going to happen.

Now the Hugos have been awarded at Denvention, it's time for the annual moaning about the ageing of science fiction. Using

nwhyte's data, I graphed the birth dates of Hugo and Nebula winners before, and I've graphed the median ages here: ( Collapse )
Again, I'm not seeing much to suggest the end is nigh. Median ages have risen before, and fallen before. I think the shocking statistic that only two awards have gone to writers born after 1970 (Tim Pratt and Elizabeth Bear who won the last two years' short story Hugos) is mainly a coincidence of threshold number: the upward trend in ages has happened to parallel the line of constant age, reflecting a delay in the appearance of the 1970s birth group for a few years longer than expected.

To me the big event is the collapse in the number of older writers represented at the novel length in the 80s, when the age range of Hugo and Nebula winners narrowed dramatically. The median ages have been climbing again from that low, as those young 80s writers grow older while continuing to win awards, and the younger writers are not coming in at a rate of exactly one year per year. That can change quickly: as the financial salesmen say "the market may go down as well as up".

despotliz wrote in a post about the 2008 Oscar nominations in

Saoirse Ronan in Atonement was brilliant.

And I couldn't resist making this:

I read this BBC news article saying "The average UK person will this year have a greater income than their US counterpart for the first time since the 19th Century, figures suggest." Now this may be true, but I would point out that "GDP divided by population" is not the same as "The income of the average person". The first is the mean, the second is the median.

That's why I'm never interested in hearing whether something is "helping" or "hurting" the country's Gross Domestic Product. The income of average people depends much more on the shape of the distribution than its total size.

Update: Elsewhere in the BBC, someone gets it right.( Collapse )

With the ESA satellite COROT nearing its first 300 days in orbit, I hear that a truckload of new extrasolar planets are due to be announced to the world soon. These detections will be based on planetary transits, which means this may be the last time my graph of exoplanets detected by doppler spectroscopy (based on data from exoplanet.eu) represent a majority of all the exoplanets known, so I'd better pimp it one last time :-)

nwhyte posted that writers born between 1942 and 1951 are overrepresented in Hugo and Nebula awards, sparking a flurry of responses attempting to explain the decline of science fiction. I think the debate is mainly missing the fact that the Hugos and Nebulas have only been around for about fifty years, and the full range of a ten year cohort's output—from the first wunderkind born at the start of the ten years who wins an award at twenty five, to the grand old man born at the end who wins at seventy five—can easily span sixty years. Jack Williamson, of the 1902-11 cohort, won the Hugo and Nebula Best Novella awards in 2001 for "The Ultimate Earth" at the age of 93. Peter Beagle of the 1932-41 cohort won the best Novelette Hugo this year for "Two Hearts".

The Hugos didn't start to be awarded until 1953, and only 23 of them had been awarded (counting ties and collaborations) by 1964, the year before the Nebulas began. We can increase this to 35 by including twelve retro-Hugos. 334 Hugos and Nebulas have been awarded since 1965. The 1942-51 cohort are in that sweet spot where the Hugos and Nebulas in all four length categories (Short, Novelette, Novella, Novel) were available to be won at all stages in their careers, starting from 1965: the first award won by a member of the cohort was the 1965 Nebula for Best Novel, Babel-17 by Samuel R. Delany. The most recent is Connie Willis's Hugo for Best Novella, for "Inside Job".

"Younger" writers, i.e., those born after 1951, haven't had time to rack up the full number of awards possible for their cohort. If we had the Hugo and Nebula results from 2007-2047 available to us, the statistics might look a little different.

Edited to correct the "first Hugos in 1946" error. Thanks to